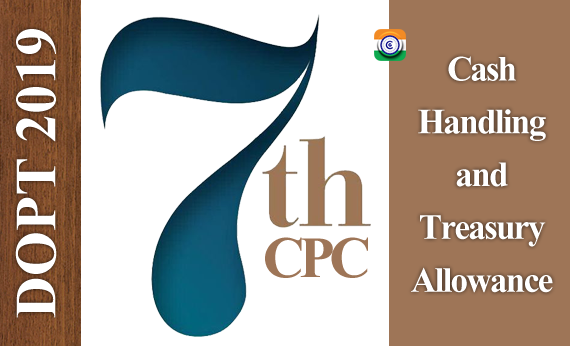 2. The powers to grant Cash Handling and Treasury Allowance remain delegated to the Ministries and Head of Departments who, at their discretion, may appoint Junior Secretariat Assistants / Senior Secretariat Assistants / Assistant Section Officers / officials holding substantive post up to level 7 of Pay Matrix, to perform the duties of Cashiers. The grant of Cash Handling and Treasury Allowance shall be subject to the following conditions:-

3. In the case of a newly created office, where it is not possible to observe all the conditions quoted above, Ministries and Heads of Departments may themselves grant Cash Handling and Treasury Allowance to cashiers during the first year of existence on the basis of the estimated average monthly cash disbursements. The other conditions quoted in para ( 2) above will, however apply.

4. Any relaxation of the above terms and conditions will require the prior concurrence of the Department of Personnel & Training.

6. In so far as persons serving in the Indian Audit and Accounts Department are concerned, these orders are being issued after consultation with the Comptroller and Auditor General of India.

Previous Post: DoPT: Nomination of civilian officers for the 75th Staff Course at Defence Services Staff College, Wellington
Next Post: DoPT: Bye-Election to the State Legislative Assembly of Haryana (36 Jind) – Grant of Paid Holiday on the day of poll